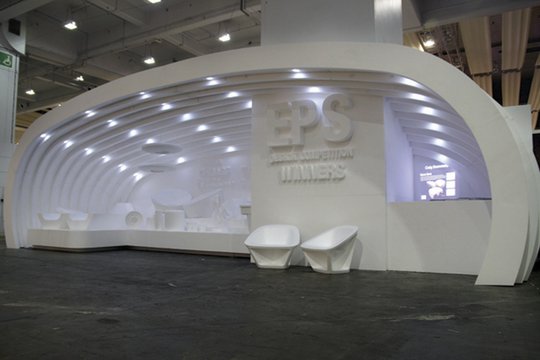 Jablite, the innovative manufacturer of EPS insulation products, has appointed top London designer, Michael Sodeau, to create the Jablite stand at the RCI (Roofing, Cladding and Insulation) exhibition on 1 and 2 November 2017.

As Official Sponsor of the RCI Show, Jablite aims to create another “Show-Stopper” exhibit to follow on from the undisputed hit it had last year with the Jablite Cube.

Michael Sodeau has history of working with EPS (expanded polystyrene). In 2007 he designed a Pavilion made completely from EPS for the 100% Design exhibition. Now ten years on, he is taking on another EPS project…

“Expanded Polystyrene – EPS is a fascinating material; it is incredibly versatile and it is 98% air so it is a resource-efficient product” says Michael.   “That is always a huge surprise to people – and of course it is the air that makes it such an effective insulator.”

“EPS is lightweight, and safe to handle, making it very easy to work with; it’s not surprising it is used in film sets all over the world. So I was intrigued by the idea of designing with EPS again.”

“Plus, working with the manufacturer – Jablite – to create an exhibition stand that will be completely recycled into new insulation boards  after the Show is also a very appealing idea.”

Richard Lee, adds: “The RCI team is aiming to attract architects to the Show this year and I am sure they will be interested in a stand designed by Michael Sodeau who has work in the permanent collection in the V&A Museum and has won several design awards.”